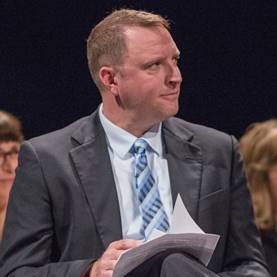 Dr. Kevin O’Rorke is the Assistant Superintendent and Vice President of Student Services at Shasta-Tehama-Trinity Joint Community College District where he has served the District as a committed, dynamic administrative leader since 2006. Kevin has provided leadership in all aspects of the District’s student services programs and has strong, positive working relationships with faculty, academic deans, administrators, staff as well as the students he so passionately serves. A tireless advocate for the college both locally and statewide, he continually looks for ways to promote and expand the myriad of programs and services provided by the District.

Kevin also serves as the Chief Executive Officer for North State Together and is joined by three other members of a team that provides backbone support to five county collective impact networks: Expect More Tehama, Reach Higher Shasta, Trinity Together: A Cradle to Career Partnership, Advancing Modoc Youth, and College to Careers for Siskiyou. The primary mission of North State Together is to support the cradle to career objectives of the five counties with the goal of increasing the education and career attainment of our North State students. Since spearheading the creation of the North State Together collaborative, he has been instrumental in bringing people and agencies together to enhance educational access and community vitality through the cradle to career collective impact model.

Kevin began his career in Higher Education in 1998 where he was an academic counselor at Northern Arizona University, he then migrated to nearby Yavapai College to serve as advisor/financial aid coordinator. By 2001, he joined the staff at Arizona State University to work as a senior advisor and faculty member. He taught graduate and undergraduate courses in Curriculum/Instruction, Learning, Motivation and Tests and Measurements at ASU until he accepted the position of associate dean of students at the third largest community college in the country located in South Florida. He joined Shasta College in 2006 as the dean of enrollment services before being promoted to Assistant Superintendent and Vice President of Student Services.

Kevin has served as the North Chief Student Services Executive Board representative to the Chancellor’s Office, was on the Board of Directors for the California Community College Athletic Association, was selected for the Chancellor’s Office task force to evaluate Community Colleges granting bachelor’s degrees, and has served on 8 Commission for Community and Junior College’s accreditation teams. He is currently a member of the Advisory Council for the CA Rural Education Network, the California State University, Chico North State Planning and Collective Board, and was recently appointed to the Shasta County Children and Families Commission.

He holds a bachelor’s degree in Public Health, a master’s degree in Counseling and a Ph.D. in Lifespan Developmental Psychology.

Kevin and his wife Kate have two strong, smart, and bold girls ages 13 and 10.